“Be the change you want to see in the world.” -Ghandi 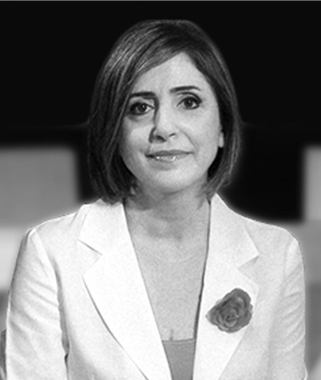 Known as the Oprah of the Mideast, Maria is beloved by a diverse range of international audiences acrossmulti-media platforms.
For nearly two decades, Maria has been a visionary in transmedia platform content creation with acclaimed and award winning content. She is executive producer and host of many long running, highly rated, and wide reaching television series, transmedia/web content, speaking engagements, conferences, and is an author of award winning lifestyle and well-being books. Her brand reaches many targeted and highly sought demographics of both women and men that is exponentially expanding.
Multinational corporations bring their brands to Maria to create and produce multi-platform media content.
for international television and radio networks to maximize their corporate brand expression to her loyal and prosperous international audiences. Maria brings dynamic creativity and production executive expertise, with proven success metrics, to brand initiatives through uplifting and highly entertaining content with a focus on family, well-being, self-empowerment and success building.

Maria Khalife is an acclaimed television personality, executive and a beloved media celebrity in the Arabic speaking world with diverse international audiences. She is host and executive producer of top rated network television and radio programs, magazine publisher, author, an in-demand motivational speaker, seminar leader and internationally recognized lifestyle and well-being coach. Beginning in the hospitality industry, Maria quickly excelled and developed a strong passion for business development and leadership training which lead her to become a professor of Hotel Management Studies at Notre Dame University, Louaize. Additionally, she studied at the London School of Business and Finance, The London Film School and The London Film Academy in London, England.

Maria’s commitment to education, her Leadership Integrative Coaching curriculum, and her passion for food and lifestyle, quickly expanded into the Soufra Daimeh television series and world class monthly magazine of the same name. Since then she has also created, executive produced and hosted four successful seasons of the acclaimed Supermom television series and lifestyle books. Her expanding multi-media production company holdings include more than 2000 episodes of varied lifestyle television content viewed by millions of people around the world.

An accomplished author, Maria’s 80 cookbook titles have sold more than one million copies. Her wide reaching multi-platform monthly magazine, weekly newspaper and blog articles focus on her core platform of education, success building, food, lifestyle and well-being. Maria lives her life with a passion for inspiring and guiding people to live their best life. She lives and works by the eloquent words of Gandhi “You must be the change you wish to see in the world.” Her ultimate goal in all her endeavors is to create peace, well-being and prosperity for all.

We are committed not only to delivering top notch services to our clients, but to creating ripples of change on all platforms of our work.

We create multi-media centers for brands. From cutting edge social media content, stunning glossy magazines, best selling books, to award winning television broadcasts. We are
experts in creating content that inspires and entertains to sell your product or message to your desired demographic audiences and international markets.